Your Voice is Puppeteering an Avatar in my Brain

I have been having a lot of video chat conversations recently with a colleague who is on the opposite side of the continent.

Now that we have been “seeing” each other on a weekly basis, we have become very familiar with each other’s voices, facial expressions, gesticulations, and so on.

But, as is common with any video conferencing system: the audio and video signal is unpredictable. Often the video signal totally freezes up, or it lags behind the voice. It can be really distracting when the facial expressions and mouth movements do not match the sound I’m hearing.

Sometimes we prefer to just turn off the video and stick with voice.

One day after turning off the video, I came to the realization that I have become so familiar with his body language that I can pretty much guess what I would be seeing as he spoke. Basically, I realized that…

HIS VOICE WAS PUPPETEERING HIS VIRTUAL SELF IN MY BRAIN.

Since the voice of my colleague is normally synchronized with his physical gesticulations, facial expressions, and body motions, I can easily imagine the visual counterpart to his voice.

This is not new to video chat. It has been happening for a long time with telephone, when we speak with someone we know intimately.

In fact, it may have even happened at the dawn of our species.

According to gestural theory, physical, visible gesture was once the primary communication modality in our ape ancestors. Then, our ancestors began using their hands increasingly for tool manipulation—and this created evolutionary pressure for vocal sounds to take over as the primary language delivery method. The result is that we humans can walk, use tools, and talk, all at the same time.

As gestures gave way to audible language, our ancestors could keep looking for nuts and berries while their companions were yacking on.

Here’s the point: The entire progression from gesture to voice remains as a vestigial pathway in our brains. And this is why I so easily imagine my friend gesturing at me as I listen to his voice.

There are many complex structures in my brain, including several body maps that represent the positions, movements and sensations within my physical body. There are also mirror neurons – which help me to relate to and sympathize with other people. There are neural structures that cause me to recognize faces, walking gaits, and voices of people I know.

Evolutionary biology and neuroscience research points to the possibility that language may have evolved out of, and in tandem with gestural communication in homo sapiens. Even as audible language was freed from the physicality of gesture, the sound of one’s voice remains naturally associated with the visual, physical energy of the source of that voice (for more on this line of reasoning, check out Terrance Deacon).

Puppeteering is the art of making something come to life, whether with strings (as in a marionette), or with your hand (as in a muppet). The greatest puppeteers know how to make the most expressive movement with the fewest strings.

The same principle applies when I am having a Skype call with my wife. I am so intimately familiar with her voice and the associated visual counterpart, that all it takes is a few puppet strings for her to appear and begin animating in my mind – often triggered by a tiny, scratchy voice in a cell phone.

Enough pattern-recognition material has accumulated in my brain to do most of the work.

I am fascinated with the processes that go on in our brains that allow us to build such useful and reliable inner-representations of each other. And I have wondered if we could use more biomimicry – to apply more of these natural processes towards the goal of transmitting body language and voice across the internet.

These ideas are explored in depth in Voice as Puppeteer.

Human communication demonstrates the usual punctuated equilibria of any natural evolutionary system. From hand gestures to grunts to telephones to email and beyond, human communication has not only evolved, but splintered off into many modalities and degrees of asynchrony.

I recently had the great fortune to join a company that is working on the next great surge in human communication: High Fidelity, Inc. This company is bringing together several new technologies to make this happen.

So, what is the newest evolutionary surge in human communication? I would describe it using a term from Virtual Body Language (page 22):

Telekinesics is a word invented to denote…”the study of all emerging nonverbal practices across the internet, by adding the prefix, tele to Birdwhistell’s, term kinesics. It could easily be confused with “telekinesis”: the ability to cause movement at a distance through the mind alone (the words differ by only one letter). But hey, these two phenomena are not so different anyway, so a slip of the tongue wouldn’t be such a bad thing. Telekinesics may be defined as “the science of body language as conducted over remote distances via some medium, including the internet”.

And now it’s not just science, but practice: body language is ready to go online…in realtime.

And when I say “realtime” – I mean, pretty damn fast, compared to most things that zip (or try to zip) across the internet. And when we’re talking about subtle head nods, changes in eye contact, fluctuations in your voice, and shoulder shrugs, fast is not just a nicety, it is a necessity – for clear communication using a body.

Philip Rosedale, the founder of High Fidelity, often talks about how cool it would be for my avatar to walk up to your avatar and give it a little shoulder-shove, or a fist-bump, or an elbow-nudge, or a hug…and for your avatar to respond with a slight – but noticeable – movement.

It would appear that human touch (or at least the visual/audible representation of human touch) is on the verge of becoming a reality – through telekinesics. Of all the modalities and senses that we use to communicate, touch is the most primal: we share it with the oldest microorganisms.

When touch is manifest on the internet, along with highly-crafted virtual environments, maybe, just maybe, we will have reached that stage in human evolution when we can have a meaningful, intimate exchange – even if one person is in Shanghai and the other is in Chicago.

And that means people can stop having to fly around the world and burning fossil fuels in order to have 2-hour-long business meetings. And that means reducing our carbon footprint. And that means we might have a better chance of not pissing-off Mother Earth to the degree that she has a spontaneous fever and shrugs us off like pesky fleas.

Which would really suck.

So…keep an eye on what we’re doing at High Fidelity, and get ready for the next evolutionary step in human communication. It just might be necessary for our survival.

The subway system in Boston has a mascot named “Charlie”, a cartoon character who rides the train and reminds people to use the “Charlie Card”. With the exception of his face, he looks like a normal airbrushed graphic of a guy with a hat. But his face? Uh, it’s f’d up. 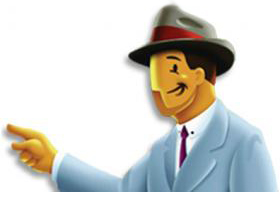 In case you don’t know yet about the Uncanny Valley, it refers to a graph devised by a Japanese robot maker. The graph shows typical reactions to human likeness in robots and other simulations. The more realistic the robot (or computer generated character) the more CREEPY it becomes….

..until it is so utterly realistic that you are fooled, and you respond to it as if it were a living human. But watch out. If the eyes do something wacky or scary, or if something else reveals the fact that it is just an animated corpse…DOWN you fall…. into the valley.

Anyway, I have a theory about the uncanny valley: it is just a specific example of a more general phenomenon that occurs when incompatible levels of realism are juxtaposed in a single viewing experience. So for instance, an animated film in which the character motions are realistic – but their faces are abstract – can be creepy. How about a computer animation in which the rendering is super-realistic, but the motions are stiff and artificial? Creepola. A cartoon character where one aspect is stylized and other aspects are realistic looks…not right. That’s Charlie’s issue.

But when an artist takes a stylized line-drawn graphic of a face and renders it with shading, I consider this to be a visual language blunder. The exception to this rule of thumb is demonstrated by artists who purposefully juxtapose styles and levels of realism, for artistic impact, such as the post-modern painter David Salle.

The subject of levels of realism and accessibility in graphic design is covered in McCloud’s Understanding Comics. The image-reading eyebrain can adjust its zone of suspension of disbelief to accommodate a particular level of stylism/realism. But in general, it cannot easily handle having that zone bifurcated.

Charlie either needs a face transplant to match his jacket and hat, or else he needs to start wearing f’d-up clothes to match his f’d-up face.