I’ve been renting a lot of cars lately because my own car died. And so I get to see a lot of the interiors of American cars. Car design is generally more user-friendly than computer interfaces – for the simple reason that when you make a mistake on a computer interface and the computer crashes, you will not die.

As cars become increasingly computerized, the “body language” starts to get wonky, even in aspects that are purely mechanical.

In a car I recently rented, I was looking for the emergency brake. The body language of most of the cars I’ve used offers an emergency brake just to the right of my seat in the form of a lever that I pull up. Body language between human bodies is mostly unconscious. If a human-manufactured tool is designed well, its body langage is also mostly-unconscious: it is natural. Anyway…I could not find an emergency brake in the usual place in this particular car. So I looked in the next logical place: near the floor to the left of the foot pedals. There I saw the following THING:

I wanted to check to make sure it was the brake, so that I wouldn’t inadvertently pop open the hood or the cap of the gas tank. So I peered more closely at the symbol on this particular THING, and I asked myself the following question:

Once I realized that this was indeed the emergency brake, I decided that a simple word would have sufficed. 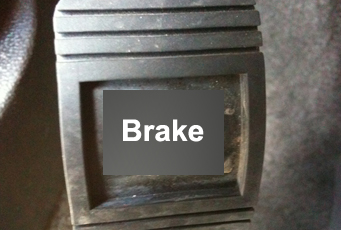 In some cars, the “required action” is written on the brake: 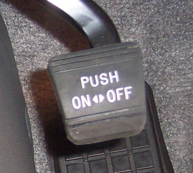 I was reminded of an episode in one of the companies I was working for, where an “icon artist” was hired to build the visual symbols for several buttons on a computer interface. He had devised a series of icons that were meant to provide visual language counterparts to basic actions that we typically do on computer interfaces. He came up with novel and aesthetic symbols. But….UN-READABLE.

I suggested he just put the words on the icons, because the majority of computer users know English, and if they don’t know English, they could always open up a dictionary. Basically, this guy’s clever icons had no counterpart to the rest of the world. They were his own invention – they were UNDISCOVERABLE.

Moral of the story:

Designed body language should corresponds to “natural affordances”;  the expectations and readability of the natural world. If that is not possible, use historical conventions (by now there is plenty of reference material on visual symbols, and I would suspect that by now there are ways to check for the relative “universality” of certain symbols).

In both cases, whether using words or visuals, literacy is needed.

Put in another way:

It is impossible to invent a visual langage from scratch. Because the only one who can visually “read” it is the creator. If it does not commute, it is not language. This applies to visual icons as much as it does to words.

As technology becomes more and more computerized (like cars) we have less and less opportunity to take advantage of natural affordances. Eventually, it will be possible to set the emergency brake by touching a tiny red button, or by uttering a message into a microphone. Thankfully, emergency brakes are still very physical, and I get to FEEL the pressure of that brake as I push it in, or pop it off….

that is…if I can ever find the damn thing.

This entry was posted on Thursday, May 24th, 2012 at 8:46 pm and is filed under Communication, Design, Natural Language, text. You can follow any responses to this entry through the RSS 2.0 feed. You can leave a response, or trackback from your own site.