(This blog post is re-published from an earlier blog of mine called “avatar puppetry” – the nonverbal internet.  I originally wrote it in September of 2009. I’ll be phasing out that earlier blog, so I’m migrating a few of those earlier posts here before I trash it).

I was speaking with my colleague Michael Nixon at the School of Interactive Art and Technology. We were talking about body language in non-human animated characters. He commented that before you can imbue a virtual character with apparent sentience, it has to have the ability to GAZE – in other words, look at something. In other words, it has a head with eyes. Or maybe just a head. Or… a “head”.

Here’s the thing about gaze: it pokes out of the local (“lonely”) coordinate system of the character and into the global (“social”) coordinate system of the world and other sentient beings. Gaze is the psychic vector that connects a character with the world. The character “places it’s gaze upon the world”. Luxo Jr is a great example of imbuing an otherwise inanimate object with sentience (and lots of personality besides) by using body language such as gaze.

I have observed something missing in video conferencing. Gaze. Notice in this set of four images how the video chat participants cannot make eye-contact with each other. This is because they are not sharing the same physical 3D space. Nor are they sharing the same virtual 3D space!

Gaze is one of the most powerful communicative elements of natural language, along with the musicality of speech, and of course facial and bodily gesture. This is especially true among groups of young single people in which hormones are flying, and flirtation, coyness, and jealousy create a symphony of psychic vectors…

At There.com, I designed the initial avatar gaze system. With the help of Chuck Clanton, I created an “intimacam”, which aimed perpendicular to the consensual gaze of the avatars, and zoomed-in closer when the avatar heads came closer to each other. 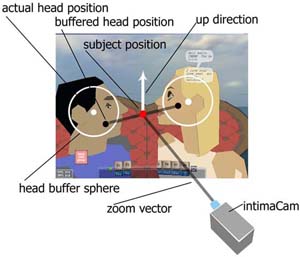 The greatest animators have known about the power of gaze for as long as the craft has existed. This highly-social component of body language has a mathematical manifestation in the virtual spaces of cartoons, computer games, and virtual worlds. And it is one of the many elements that will become refined and codified and included into the virtual body language of the internet.

Human communication is migrating over to the internet – the geo-cortex of posthumanity. Text is leading the way. Body language has some catching up to do. Brian Rotman has some interesting things to say along these lines in his book, Becoming Beside Ourselves.

We can learn a lot from Pixar animators, as well as psychologists and actors, as we develop virtual worlds and collaborative workspaces.

“Consider Including” Google Stupidity and Arrogance

A little off-topic here, but I just can’t resist taking another jab at The Google.

I am a gmail user, but more recently I have considered switching.

And then there is the little yellow “Important” symbol that one day magically appeared next to some of my messages. When I roll over the symbol I see the text, “Important mainly because of the people in the conversation”.

Yo Google: how ’bout if I decide what’s important.

One person in the Google forums complained about gmail tagging her message as: “Important mainly because of the words in the message”. She says, “Can we stop with the idiotic messages from Google, as if our paternalistic uncle was looking out for us?”

But that’s not what I want to talk about: I want to talk about a feature which is the ultimate example of Google developers trying to be oh so clever but just coming across as stupid. I’m talking about the text that appears when I’m composing an email to someone, which says, “Consider including: John, Rebecca…” And so on.

Peter Thomas, one of the many bloggers who has complained about this ridiculous feature, summarizes it:

“When you type an e-mail, Gmail comes up with a list of people that you may like to also copy it to. Let’s pause and just think about this. You are writing an e-mail, generally the first thing that you do is to type in the address of the person (or people) you are writing to. Gmail has a useful feature that scans your previous mails, so typing “Pe” will bring up “Peter Thomas” as an option. So far so good….

…but then, gmail offers a list of people that you may consider including as recipients of your email, based on simple association. Hello? What if I am emailing a colleague to complain about the boss? I certainly don’t want to include the boss, and it scares me that his name is sitting up there, a mouse-click away from disaster. Or what if I am plotting a surprise birthday party for Beth? Including Beth is specifically NOT what I want to do.

And…what if the person is DEAD?

I found this on the Google forums:

“I deleted my dead friend as a contact which was traumatic enough, but having google STILL suggesting I include her when there’s honestly nothing I’d like better than to be able to include her BECAUSE SHE’S DEAD.  How do I make this stop?!?!?!”

Please get out of the business of reading our minds. You suck at it.

Peter Thomas concludes: “This “feature” is bad enough to have merited me writing to Google asking them to remove it, or at least make it optional. Their support forums are full of people saying the same. It will be interesting to see whether or not they listen.”

Do a search for “consider including”, and you’ll come across several people railing against this act of stupidity from Google. My blog post is not original. Yet I feel compelled to add another voice to the chorus.

Do I have any conclusions or insights? Not really, other than my opinion that any good thing can turn bad when it gets too big and too powerful. Google is generally a good thing. But I think Google is getting too big and too powerful. And I am getting smaller and less powerful, in relative terms. I want to be completely in charge of how I communicate with my friends and colleagues.

The fact that Google is brimming with young, clever, cocky geeks does not make for an agreeable form of world domination.